It may take a bit of practice, but you’ll be able to see the silhouette dinosaur rotating either way around.  One way round, it’s  rotating just like the top right hand of the four coloured dinos.  To see it rotate the other way round, start with the head facing left.  Then try imagining that the head is getting nearer to you as it goes lower.  Once you’ve seen the rotation go both ways, it tends to change spontaneously from one to the other.

I’m not great at imagining 3D shapes moving in space. When I set this up, I assumed that when the silhouette rotates the way around that doesn’t match the top right hand coloured dinosaur, it  will instead match one of the two left hand dinos, but half a rotation out of step.  The top left one is just a mirror reflection of the top right coloured one, and the lower left one a time-reversed version of it.  But I wasn’t sure which of the those left hand dinos it would match.  (The lower right coloured dino is a reflection plus a time-reversal of the top right one.  That switches the rotation twice – back to matching the way around the top right dino goes).

But the silhouette dino, when seen as rotating opposed to the top right dino, isn’t like either of the left hand versions!  In those, the head is always nearest to us when it’s at its highest, and furthest from us when it is lower down.  With the silhouette view clockwise, it’s the other way round:  the head is nearest to us when its low down.  I think it’s an impossible view, invented by the brain.  There’s no way I can get the real dino to give me that view.  (Actually – full disclosure – I didn’t film a real dinosaur.  It’s a model).

I haven’t quite puzzled out why the views work like this.

I found the explanation in a chapter in the wonderful Oxford Compendium of Visual Illusions,  Nicolaus F. Troye “The Kayahara silhouette illusion” pp 582-585. 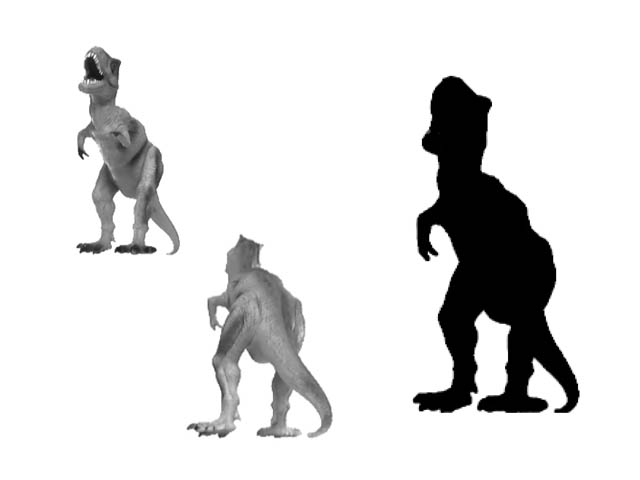 The key is that the sihouette version image is not just rotationally ambiguous (it rotates clockwise or anti-clockwise), even as a static image it’s also depth ambiguous.  So the silhouette above can either appear just like the upper left dino in the picture, head nearest to us, or a bit like the lower centre dino, head furthest away.  Both ambiguities – rotation and depth – can only flip at the same time.

But note that the silhouette and the picture of the dino with head more distant are not quite the same.  That’s because the dino extends so far into depth that it shows perspective effects.  First, with reversal our viewpoint slightly changs.  But more strikingly, when we see the silhouette dino with its head furthest from us, the head looks far too large.  That’s because of the size constancy effect – we tend perceptually to enlarge the size of more distant objects.  So here, when the head is seen as more distant, it also appears far too large, and the tail, conversely, too small.

That also applies with the moving version, when the silhouette dino is seen as revolving anti-clockwise:  its head seems to shrink as it rotates towards us, and to expand as it rotates away.

We  just got into the final top ten entries in the annual Best Visual Illusion of the Year contest.  We didn’t get in the top three, (in fact, we seem to have come last … ) but it’s great to have made the top ten.  The movie here is a different version of our competition entry.

The illusion is that the objectively static sides of a V-shaped window appear either to expand or to contract horizontally. Figures within the window, expanded at the top and squashed at the bottom into the V-shape, rise or fall at constant speed.

At the end of this version, we show that we’ve actually found three fairly different ways of producing this illusion.  We found them by studying the reflections seen in novelty illusion rings called Witch Rings as they rotate.  We posted about using animations to imitate effects seen in the reflections, in 2013, and then in 2015 and 2016.  But now we think the illusion we’ve found in our animations, though an interesting discovery, only makes a small contribution to the very vivid illusion seen in the rings in the real world – the secret of the rings remains mysterious!

END_OF_DOCUMENT_TOKEN_TO_BE_REPLACED

I’ve copied this beautiful demo (with small changes) from one by Stuart Anstis, who is one of the world’s leading and most prolific researchers into illusions.  His website includes a page of great movies, including this one.  Whilst the yellow circles are visible, we tend to focus locally on the pairs of spheres, each pair orbiting a central point.  But without the circles, loosely fixate the central blob, and though the movement of the spheres remains just the same, they appear to re-group into a more global view, of two pulsating, intersecting circles of spheres.

I came across Stuart’s movie amongst the many web pages of figures and demonstrations that accompany a once-in-a-generation, landmark publication, the Oxford Compendium of Visual Illusions.  (It’s not cheap – check the price before ordering!).  But that’s because it’s HUGE, with some 800 pages.  Almost all the leading researchers in the field worldwide have contributed, with essays on the history of visual illusions, up-to-the-minute, detailed discussions of a comprehensive range of illusions and effects, and philosophical essays on whether the word illusion is really the right term to describe them.

END_OF_DOCUMENT_TOKEN_TO_BE_REPLACED

Go back a couple of centuries and there were no chains of shops or malls. In the high street in the UK you would have found the type of shop you were after by looking out for a sign hanging out.  There were signs for pharmacists, tobacconists, pawnbrokers, whatever.  Nowadays there’s just one traditional sign still sometimes to be seen – the barber’s pole, as left in the animation.

The barber’s sign shows a famous illusion.  The cylinder is rotating horizontally around a vertical axis, but the stripes look as if they are rising – which would be impossible, unless you had some long pole sliding through the cylinder.

You can begin to see why in the demo on the right:  focus on the vertical slot and the grating seems to be moving vertically (as in the barber’s pole).  But focus on the horizontal slot and in a moment the grating may seem to move horizontally.  Behind the round hole, for me it tends to look as if moving obliquely.

Want to know more about what’s going on?
END_OF_DOCUMENT_TOKEN_TO_BE_REPLACED